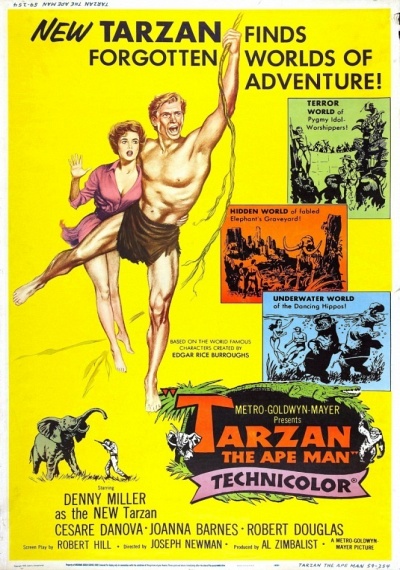 Tarzan swings back into action in this thrill-packed adventure starring Denny Miller, Cesare Danova, Joanna Barnes and Robert Douglas. When a Watusi leads them to believe his distant homeland lies near an elephants' graveyard, Colonel James Parker (Douglas), his daughter Jane (Barnes) and partner Harry Holt (Danova) embark on a hazardous trek to recover a fortune in ivory. Struggling through the jungle and heat, Jane is saved from a savage animal attack by a mysterious man of the wild (Miller). As the expedition travels through uncharted lands to a lost city fraught with peril and danger, their only hope of survival lies with the stranger who's won Jane's heart: Tarzan, Lord of the Jungle. A Technicolor® remake of M-G-M's 1932 classic, Tarzan, the Ape Man was directed by two-time Oscar® nominee Joseph Newman (This Island Earth) and features a score composed especially for the film by jazz legend Shorty Rogers.