The Last of Mrs. Cheyney 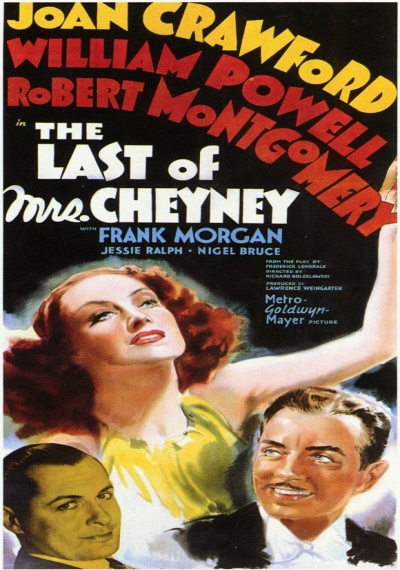 Academy Award winner Joan Crawford, William Powell and Robert Montgomery star as a beguiling international jewel thief and the English aristocrat who wins, then breaks, her heart in The Last of Mrs. Cheyney. Monte Carlo: The cunning Fay Cheyney (Crawford--The Women) impersonates a wealthy widow in a bid to steal a fortune in jewels from Mrs. Webley, but her plans are interrupted by a romance with Mrs. Webley's nephew, Lord Arthur Dilling (Montgomery). Still, during a soiree at Mrs. Webley's mansion, greed gets the better of Fay Cheyney, and she attempts to steal Mrs. Webley's pearls. Dilling catches her in the act -- and tries to use the information to force his attentions on her. Offended at the insult to her honor, the jewel thief confesses all to Mrs. Webley ... that begins a very shocking turn of events!