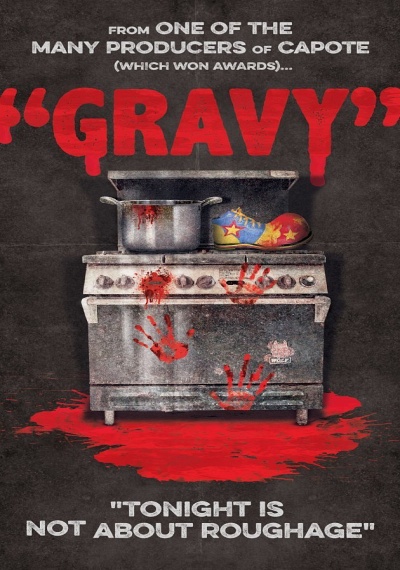 Paying homage and using clever allusions to both classic and cult horror films, Gravy is a biting story about three seemingly normal people, two men and one woman, who go on a Halloween night killing spree in a small Mexican restaurant and then proceed to eat their victims in fun, whimsical ways. Inside Raoul's Mexican Cantina we find the various employees who are finishing their shifts and getting ready to say good-bye to Kerry (Sutton Foster), the bartender who is leaving to become a paramedic. The other lovable characters are the hot and playfully obnoxious hostess, Cricket (Molly Ephraim), Hector (Gabriel Luna), reformed pugilist busboy, Winketta (Gabourey Sidibe), an over-the-top mouthy African-American female security guard, Yannick (Lothaire Bluteau), an insufferable French chef and Chuy Ramirez (Paul Rodriguez), the patriarchal manager. One of the last patrons inside the restaurant is Burt (Ethan Sandler), a depressed guy whose girlfriend has just turned down his marriage proposal. Unfortunately for this group, this Halloween night is about to take an unbelievably shocking turn as our trio of cannibals, Anson (Michael Weston), Stef (Jimmi Simpson) and Mimi (Lily Cole), successfully weld the front and back doors of Raoul's shut, cut the phones lines and set the perfect stage for their night of gluttony. What ensues is a virtual blood bath, albeit a farcical one with snappy dialogue and surprising character bonds. It's a classic battle of good versus evil-ish to the bitter end as they fight to survive an absolutely stunning night of delicious and carnivorous terror.