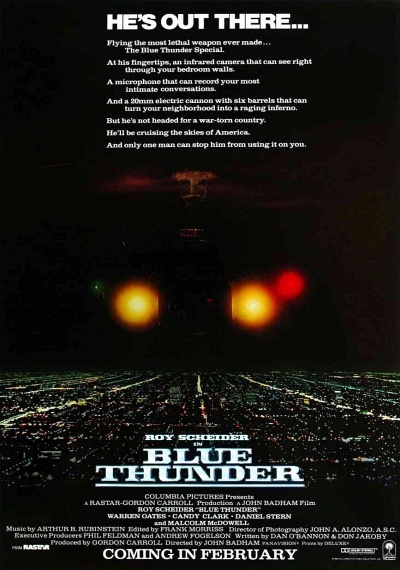 Roy Scheider stars in this fast-paced, gripping thriller as Los Angeles police pilot Frank Murphy. Hand-picked by his boss to test an experimental attack helicopter called Blue Thunder, Murphy is amazed by its ability to see through walls, record a whisper or level a city block. But when he uses the craft&#39;s high-tech equipment to record a meeting in which Blue Thunder&#39;s secret destiny is revealed--to be the ultimate weapon in illegal domestic surveillance and crowd control-Murphy is targeted for elimination. While his girlfriend (Candy Clark) tries to get the tape into the hands of the media, Murphy commandeers Blue Thunder and leads a spectacular chase through the skyscraper canyons of downtown Los Angeles with Air Force F-16s and police S.W.A.T. teams in pursuit, intent on silencing him permanently.