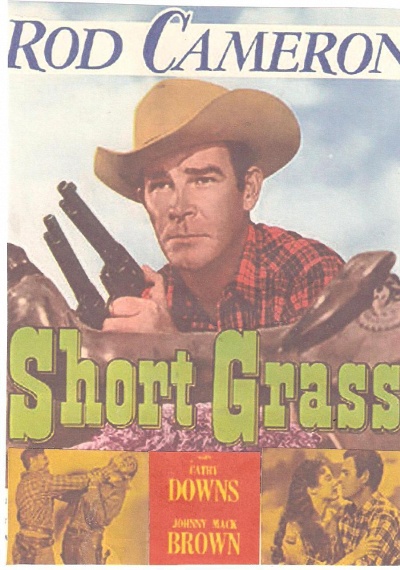 Steve Llewellyn hung up his guns after killing a man in self-defense, left Willow Creek and went on the drift for five years. Now he's back. And the bad blood stirred up by his return and the violence caused by a cattleman's grab for all the good grasslands mean Steve must strap on his sidearms again. Rod Cameron -- who became a marquee draw with a pair of espionage serials in the 1940s and went on to establish himself as a popular cowboy star -- makes Steve a hero to reckon with in Short Grass, one of the actor's 10 films with busy shoot-'em-up director Lesley Selander. Johnny Mack Brown, a sagebrush stalwart in his own right, plays the marshal who allies with Steve. Adding to the Western pedigree is costar Cathy Downs, who plays the title role in the iconic My Darling Clementine. Buffs will note other familiar faces, including Alan Hale, Jr., well remembered as the skipper who takes a "three-hour tour" to Gilligan's Island.