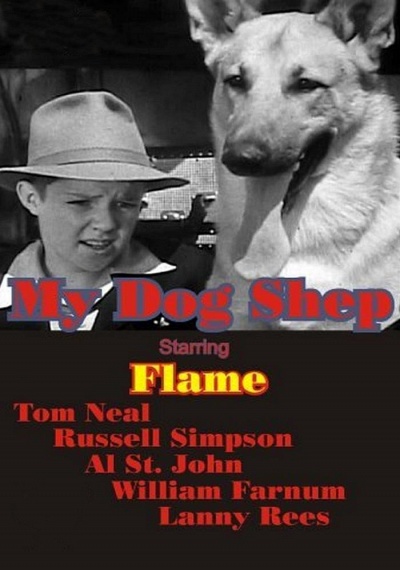 When orphaned city-boy Danny is shunted off to distant relatives in the country, neither he nor the German Shepard he's adopted en route are made welcome. In fact, his miserly uncle and brat cousin get out the shotgun when they discover the dog Danny has been hiding. Boy and hound run away, soon befriended by a self-professed "old codger" (erstwhile silent star William Furness) who likewise has "run away" from an ungrateful son and daughter-in-law who no longer want him around. Once it's discovered Danny is heir to a small fortune, however, the trio become highly sought after by various unfriendly types (including a corrupt sheriff and some kidnapping gangsters). The only person on their side is a district attorney played by Tom Neal, best remembered as the beleaguered hero of Edgar Ulmer's no-budget noir cult classic DETOUR. Needless to say, it's man's-best-friend who ultimately saves the day. This family adventure was successful enough to spawn a 1948 sequel, SHEP COMES HOME. It again starred canine "Flame the Wonder Dog" (who continued working in film and television projects through the mid-1950s). Writer/director Ford Beebe lasted considerably longer in showbiz; he was a prolific maker of "B" flicks (mostly westerns and jungle auctioneers) for nearly half a century. - Dennis Harvey