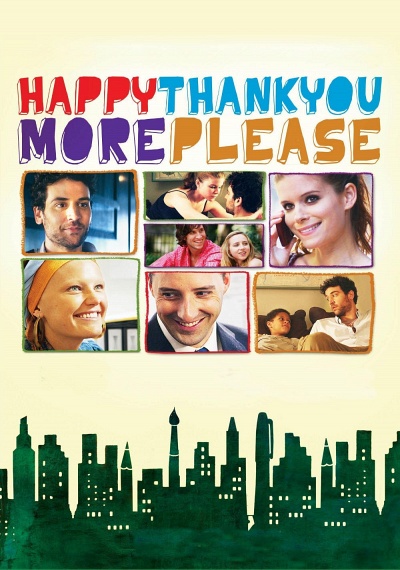 Josh Radnor (TV's HOW I MET YOUR MOTHER) wrote, directed, and stars in happythankyoumoreplease, a sharp comedy centered on a group of 20-something New Yorkers struggling to figure out themselves, their lives, and their loves. Sam Wexler (Radnor) is an aspiring novelist whose life changes when he meets Rasheen, a young boy separated from his family, on the NYC subway. When Sam learns Rasheen has already lived in six previous foster homes he agrees to let him move in temporarily. As a friendship develops between the two, Rasheen meets Sam's circle of friends: Annie (Malin Akerman of COUPLE'S RETREAT), who has an auto-immune disorder resulting in the loss of her hair and her self-esteem; Mary Catherine (Zoe Kazan of IT'S COMPLICATED) and Charlie (Pablo Schreiber of VICKY CRISTINA BARCELONA), a couple whose potential move to L.A. threatens their relationship; and Mississippi (Kate Mara of 127 HOURS), an aspiring singer/waitress who tests Sam's fear of commitment. In return, he helps Sam realize adulthood may not be about waiting for the right answers, but about stumbling ahead and figuring them out."