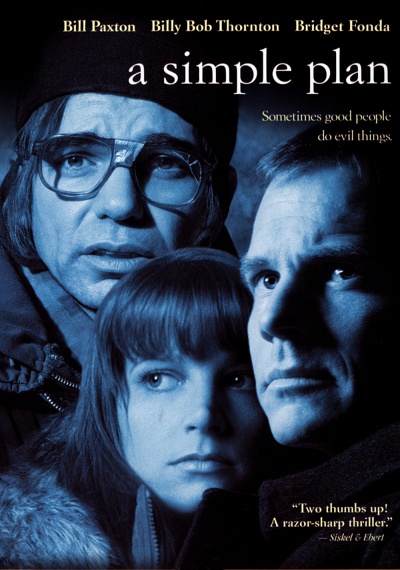 Based on Scott Smith's bone-chilling blockbuster 1993 novel, A Simple Plan is a bit of a departure for horror-film director Sam Raimi. Instead of flying eyeballs and dancing corpses, A Simple Plan is a taught crime thriller in the vein of Joel Coen's Academy Award-winning Fargo. Set during the white winters of Minnesota, this story tells the eerie tale of Hank and Jacob Mitchell (played by Bill Paxton and Billy Bob Thornton) who, along with a buddy, find a downed single-engine plane buried in the snowy woods. Inside it is a decaying pilot and a bag carrying four million dollars in one-hundred-dollar bills. The men decide to hide the money until spring when the snow is melted and the plane is found. If no one notices the missing money at that time, they will split it and live a wealthy new life. A simple plan, right? Wrong. Much like Humphrey Bogart's The Treasure of the Sierra Madre, things can only get worse, as distrust and greed creep into the minds of the principles. They find it difficult to decide which one gets to hold the money — and even more impossible to keep from dipping into the stash until spring. And so on. It also becomes increasingly tough to keep a secret of this magnitude. And if all this doesn't get movie-goers' right-brains working, it seems there are suspicious characters in town who just may be able to link them to the plane, forcing the more dangerous and bloody question of what to do with those people and how to cover their tracks.